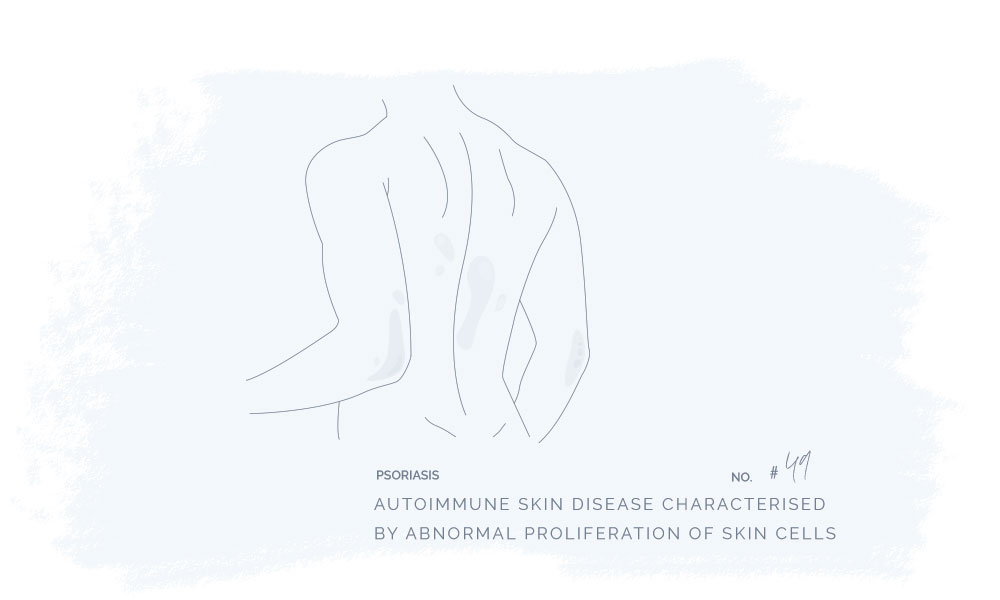 Psoriasis is a common chronic, non-contagious, hereditary, and auto-immune-related skin disease. The main symptoms of psoriasis are rapid growth of  epidermis and silvery-white scales that develop in inflamed, reddened, dry, rough, and itchy areas of the skin. There is no known cure for psoriasis, however, treatments are available to relieve the symptoms.1

The disease is autoimmune related as it is believed that the immune system mistakenly identifies skin cells as foreign to the body. This causes the body to dismiss the skin cells, resulting in the regenerating/overproduction of new skin cells faster than normal.1

Psoriasis tends to go through cycles, with several weeks or months of flaring, then subsiding for a period of time before going into remission.
In addition to the skin, psoriasis can affect other organs such as the blood vessels, heart, liver, or metabolic processes as well as joints.1

Besides that psoriasis is genetic, research proposes that the development of the disease can be provoked by environmental factors.

Some of the external factors that may trigger psoriasis for those who are predisposed are:1

Please refer to our arthritis disease entry for more information

Preclinical data suggests CBD and THC among other cannabinoids may be therapeutic for psoriasis.

The connection between Cannabinoids & Psoriasis

Scientific research proposes that cannabinoids can have healing opportunities in the treatment of autoimmune diseases, here among psoriasis, as the balance of the immune system is connected to the endocannabinoid system.

Preclinical data have suggested that THC and CBD among other cannabinoids CBG and CBN, may be therapeutic in the treatment of psoriasis.2

The literature discussion is an overview of the published results from scientific studies investigating if and how cannabinoids can be beneficial in the treatment of Psoriasis. The overview will be updated regularly to ensure the newest and most accurate information.

Ramot et al., discussed that kKeratins K6 and K16 which play a role in wound healing can be downregulated by stimulating CB1 in human keratinocytes.5, highlighting the relevance of the cannabinoid system in therapeutic treatment of psoriasis.

Cannabinoid signaling may be curial in several skin related diseases
In a review article by Tóth et al., it was described that Cutaneous cannabinoid signaling plays a crucial role in barrier formation and regeneration, and in keeping skin homeostasis . Also, its dysregulation may lead to several diseases and disorders, including atopic dermatitis, psoriasis, scleroderma, acne, hair growth, and pigmentation disorders, keratin diseases, various tumors, and itch.

This review focuses on the skin-relevant endo- and phytocannabinoid scientific literature centered on the presumed translational potential, promising future research directions and challenges.

Changes in ECS seen in Psoriasis patients may play a role in treatment
In a study, skin biopsies from 25 psoriasis patients were evaluated using RNAseq and this was compared to region-matched skin of healthy individuals with several essential “cannabinoid-relevant” genes being differentially expressed. Also, it was demonstrated that the expression of adenosine A1, A2A, A2B, A3 receptors, CB1, CB2, PPARa ‘] PPARa [/simple_tooltip], and PPARγ was decreased, while the expression of FAAH1 , TRIB3 , TRPV1, and TRPV3 was increased in itchy lesional skin of psoriasis patients. Overall, changes in the endocannabinoid system can be seen in patients suffering from psoriasis, pointing out that certain cannabinoids may play a potential role in treating such disease.6

CBD may be therapeutic in treatment of Psoriasis
In a paper by Kaplan et al., it was shown that CBD inhibits T cell function and that CB1 and/or CB2 are involved in the magnitude of the In vitro Anti-SRBC IgM AFC response </strong >.7

High bioavailability of CBD in transdermal application
Paudel et al. aimed to evaluate nasal and transdermal permeation using rats and guinea pigs, respectively. Intranasal delivery of CBD showed a Bioavailability of 34-46% with CBD being absorbed within 10 minutes. Polyethylene glycol formulation in rats showed a bioavailability of 100% and the use of enhancers did not improve bioavailability. Transdermal gel application in guinea pigs showed that the steady-state plasma concentration of CBD was sufficiently high for this administration route for CBD to be considered beneficial for treating chronic pain. Furthermore, it was demonstrated that with the use of enhancers, the steady-state concentration of CBD was increased by 3.7-fold. This shows that CBD could be successfully administered intranasally
or transdermally.9

High prevalence of plaque Psoriasis
In a ahospital-based descriptive study by Velappan et al, the different clinical pattern and prevalence of psoriasis were investigated. 400 self-reporting patients aged 6-87 years suffering from psoriasis were included in the study. Three months’ study took place in a medical college located in Tamil Nadu, South India. Different evaluations for psoriasis patients were performed, such as detailed history, clinical examination, and biopsy when needed.
The study found that chronic plaque psoriasis was the most common type of psoriasis (63.2%) regardless of age and sex. 7% of patients suffering from psoriasis also experienced joint involvement with oligoarthritis being the most common. For example, some psoriasis patients were diabetic (19.5%) and the risk of obesity is increased by psoriasis. The data obtained in this study are in agreement with previous hospital-based prevalence studies of psoriasis.9

If you have any further information relevant to the connection between Psoriasis and cannabinoids or find any of the information inaccurate, outdated or incomplete please contact us here.

MORE
Autoimmune Inflammatory Skin
Share :
We use cookies on our website to give you the most relevant experience by remembering your preferences and repeat visits. By clicking “Accept All”, you consent to the use of ALL the cookies. However, you may visit "Cookie Settings" to provide a controlled consent.
Cookie SettingsAccept All
Manage consent