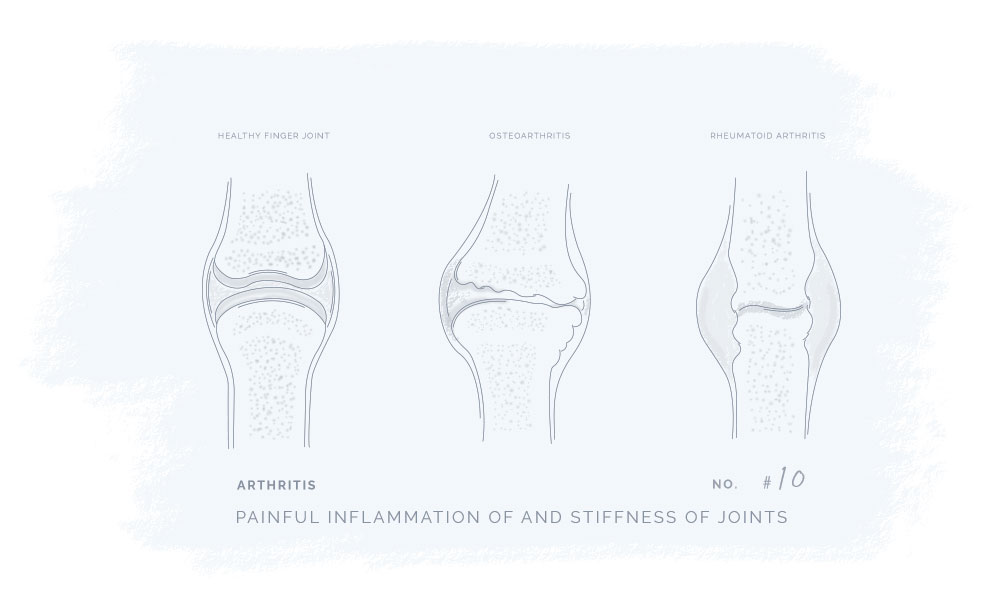 Arthritis is an inflammation that affects one or more joints in the body. The main symptoms of the disease are pain, swelling, tenderness, and stiffness in the affected joint(s) which typically worsen with age.1

There are 7 different types of arthritis:

Whereas osteoarthritis and rheumatoid arthritis are the most common.

Osteoarthritis
Osteoarthritis can cause the breakdown of cartilage in the joints.  It can also affect the entire joint(s) by causing changes in the bones and degeneration of the connective tissues that hold the joint together and attach muscle to bone. In other words, osteoarthritis damages the joint’s cartilage cushions.
The cartilage allows close to frictionless joint motion. However, when the cartilage is damaged it can result in bone grinding directly on the bone which causes swelling, pain, and restricted movement.
The disease is often referred to as “wear and tear” as it may occur over many years, however, it can be provoked by a joint injury or infection too.

Rheumatoid arthritis
Rheumatoid arthritis is an autoimmune disease as the body’s immune system attacks the lining of the
joint capsules which become inflamed and swollen. The development process of the disease can similarly to osteoarthritis degenerate both cartilage and bone within the joint.

Pain, swelling, tenderness, and stiffness in one or more joints in the body.

Preclinical data suggests CBD and THC among other cannabinoids may be therapeutic in the treatment of Arthritis.

The connection between Cannabinoids & Arthritis

Due to the nature of arthritis, local treatment to the surface area of the affected joints can provide the most efficient pain relief. If treatment with cannabinoids is used topically, the potential psychoactive effects from THC (if present) will be avoided. To find out more, please visit our application options guide.

The literature discussion is an overview of the published results from scientific studies investigating if and how cannabinoids can be beneficial in the treatment of Arthritis. The overview will be updated regularly to ensure the newest and most accurate information.

CBD may block disease progession
In a paper by Malfait et al.6, disease progression was effectively blocked by a CBD dose of 5 mg/kg per day intraperitoneally (i.p.; substance injection to the peritoneum (body cavity)) or 25 mg/kg per day orally in mice with collagen-induced arthritis. Also, joint damage, lymphocyte proliferation as well as IFNγ and TNF expression were suppressed after CBD administration.

CBD may suppress T cell function
Kaplan et al.8, discussed that cannabidiol (CBD) is one of the most common cannabinoids found in Cannabis Sativa. It does not have a high affinity for either the CB1 or CB2 cannabinoid receptors. Similar to other cannabinoids, it was shown that CBD suppressed attacks from the immune system (psoriasis and rheumatoid arthritis). The data of this study suggest that CBD suppresses T cell function and that CB1 and/or CB2 play a critical role in the magnitude of the In vitro Anti-SRBC IgM AFC.

CBD may have an anti-inflammatory effect
In a review article by Bruni et al.9, it was described that localized symptoms such as dermatological conditions and arthritis can potentially be treated through topical administration. Also, capsaicin patches have been suggested as a second-line treatment to relieve peripheral neuropathic pain. CBD was shown to alleviate arthritic pain-related behavior and have an anti-inflammatory effect without noticeable high-brain-center psychoactive effects. Also, CBD was found to reduce knee-joint swelling by using a dose of 6.2 mg/day, and that increasing the dose to 62 mg/day did not enhance the effect. In the same arthritic model, oral administration of CBD has been shown to result in poorer absorption compared to transdermal administration.

Collagen involvement in symptom relief and joint damage
Lonza, n.d & Lonza. 10, discussed that a small intake of oral UC II undenatured type II collagen boosts the production of key cells and cytokines connected with the induction of oral tolerance while diminishing arthritis symptoms. In vitro it was demonstrated that IL-10, one of the anti-inflammatory cytokines is involved in diminishing the destructive effects of TNF-alpha. The amount of TNF-alpha cytokine has been shown to be higher in osteoarthritis that harms chondrocyte survival and cartilage function. Bagchi and colleagues have shown that UC II undenatured type II collagen has biologically active epitopes to trigger oral tolerance. Further, research shows that the undenatured type II collagen is involved in symptom relief and protects against joint damage.

Cannabinoids in transdermal combination therapy
In an article by Stinchcomb et al.11, it was aimed to measure the amount of the in-vitro human skin transdermal flux of THC, CBD, and CBN due to their potential for transdermal combination therapy. The results showed that a lower heat of fusion and higher calculated relative thermodynamic activity was observed for CBN compared to CBD. The transdermal flux of Delta8-THC and CBD were enhanced by ethanol concentrations of 30 to 33% and tissue concentrations of CBN were significantly lower than for Delta8-THC. Lag times for CBN were shown to be longer than for CBD, and the permeabilities of CBD and CBN were shown to be 10-fold higher compared to Delta8-THC. As all three compounds have significant flux levels, further studies will be conducted on combinations of these cannabinoids using ethanol for the formulation of transdermal patches both in vitro and in vivo.

Bioavailability of CBD application
Paudel Et. al.12, aimed to evaluate nasal and transdermal permeation using rats and guinea pigs, respectively. Intranasal delivery of CBD showed a bioavailability of 34-46% with CBD being absorbed within 10 minutes. Polyethylene glycol formulation in rats showed a bioavailability of 100% and the use of enhancers did not improve bioavailability. Transdermal gel application in guinea pigs showed that the steady-state plasma concentration of CBD was sufficiently high for this administration route for CBD to be considered beneficial for treating chronic pain. Furthermore, it was demonstrated that with the use of enhancers, the steady-state concentration of CBD was increased by 3.7-fold. This shows that CBD could be successfully administered intranasally or transdermally.

CBD & THC in pain and sleep treatment
Blake et al.13 compared Sativex with a control group in a randomized, double-blind, parallel-group study which included 58 patients to assess the efficacy of THC and CBD (Sativex) in the treatment of pain induced by rheumatoid arthritis. Sativex was shown to be effective in diminishing pain and ameliorating sleep.

Method: In this exercise physiology laboratory study, the effect of 500 g ice (for 20 min) and 3.5 ml Biofreeze (gel with alcohol/water mixture and 3.5% menthol) was applied to 17 healthy volunteers on the forearm to 700 cm2) against any treatment for changes in blood flow (measured by Doppler ultrasound) and muscle strength (maximum isokinetic flexion and extension of the wrist).

Results: Biofreeze reduced blood flow in the radial artery at 5 minutes, but not after 10,15, or 20 minutes. Ice, on the other hand, only worked at 20 minutes.
Muscle strength did not increase after the ice was removed, whereas it increased significantly during control and after Biofreeze rubbing.

Conclusion: Biofreeze has a rapid onset, short-term reduction in blood flow, while in ice this occurs over a longer period of time. Muscle strength is only negatively affected by ice.

Method: 10 healthy male subjects (25-30 years). Gel preparations with 0.5% – 4.6% – 10% menthol in ethanol / water mixture (alcohol 8%) were tested on the thigh after randomized application. Cooling of the skin determined by an infrared camera and the subjective sensation of coldness determined by a visual analog scale (VAS rating).

Result: Significant at all skin temperatures regardless of the concentration of menthol (P <0.05) decreased by more than 5 ° C for approx. 40 minutes.
4.6% menthol was found to be significantly cooler than the other gels. The cooling effect from 31 ° C to 23 ° C is limited to the application area and does not affect the surrounding skin areas.

Conclusion: Menthol concentration has no influence on measurable skin cooling. The measurable reduction in temperature must be triggered by evaporative cooling of the alcohol/water mixture. Menthol only increases subjective cooling perception (VAS rating).

If you have any further information relevant to the connection between Arthritis and cannabinoids or find any of the information inaccurate, outdated or incomplete please contact us here.

MORE
Autoimmune Genetic Disorders Inflammatory Joint
Share :
We use cookies on our website to give you the most relevant experience by remembering your preferences and repeat visits. By clicking “Accept All”, you consent to the use of ALL the cookies. However, you may visit "Cookie Settings" to provide a controlled consent.
Cookie SettingsAccept All
Manage consent